Yvone challenges Franchesca to a match in the ring and they both come with their boy friends. One boy friend is video taping while the other shoots still photos and each thinks his girl will be the victor, while each lady plans on disgracing her opponent in front of her man. Soon all is topless and heated as the men cheer them on, maybe a little too much as Franchesca attacks one boy friend who gets too involved but Yvone saves him and gets the upper hand. And the destruction begins – she beats Franchesca then rides the broken girl around the ring as she slaps her hard on the ass with her hand. Yvone's side muscles flex as her large breasts sway to Franchesca's beautiful face. Franchesca's boy friend is livid and he protests which sends Yvone to him. She tells him what she has planned and he's horrified but not allowed to help her. 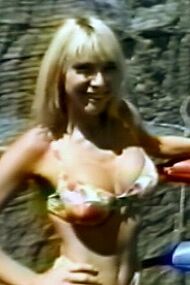 We soon find out that while Mia may have beaten up Yvone, she still really likes Mia and never forgot how Franchesca made her eat dirt in tape 213 – time for pay back. The black bag comes out and with it comes domination and degradation that goes all the way! Dog collar, bone and oh it's too much too be believed – so if you are not ready for all the way – don't order this tape.
Mia (DT)