IF THE SIGHT of four sexy blondes fighting it out in bras, stockings and garter belts rocks your world, then get ready for a real earthquake! Our first match introduces a new bombshell to DT's fighting militia, the tall, buxom and sensational Stephanie, whose black micro-mini and high-heels are the only outerwear she has on over her bra and stockings as she lets the similarly attired Sandy into her home. Sandy is investigating a rash of jewelry thefts in the area and proceeds to search Stephanie's digs. Stephanie resents Sandy's accusations and attacks the big-breasted trespasser in a hair-pulling, limb-twisting, body-bruising donnybrook that starts in Stephanie's bedroom but soon spills over to the parlor after one girl is knocked out and carried, topless, to the couch. She recovers quickly, however and, after a wild barrage of blows, chokes and scissors, one bodacious blonde is finally knocked out for the count.
Sandy (DT) 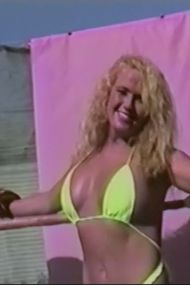 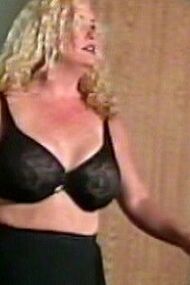 KNOCKOUTS ARE numerous in our next undie-war as we welcome back lovely Raq-L who appeared in only a couple of matches a year ago and has now returned for more. The blonde spy enters the room dressed in black bra, garters, hose and panties accented with high heels and white elbow-length gloves as she searches for a mysterious computer chip. Unbeknownst to Raq-L, secret agent Stacy, dressed in red undies, heels and gloves, is also looking for that same chip. Before she can react, Raq-L is caught from behind in a breathtaking chokehold that squeezes her into unconsciousness. As the triumphant Stacy searches her victim, Raq-L recovers and begins her own choking attack on her adversary. Both bosomy babes are about even in height and weight so the advantage changes several times as each girl takes her turn as victim and victor. Leg scissors, hand, breast and even kissing smothers take their toll on one topless vixen who is tied up as her bare-bosomed conqueror continues her search for that elusive chip.
Stacy (DT) 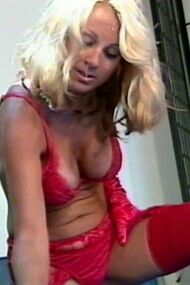 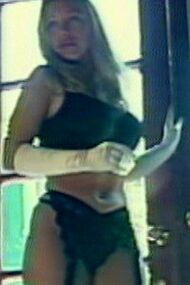