Jane Crombie vs Pamela Wilkinson
Two powerfully built brunettes climb through the ropes to match strength and wrestling skill. Jane Crombie, at 148, carries a weight advantage over the 138 pound Pam Wilkinson. But Pam's given a way poundage to opponents in the past, so she,s not intimidated.
The wrestling is fast, hard and clean for most of the match. Each knows her holds, counters and escapes. So neither can gain the edge over her opponent that could spell victory. But then one digs into her bag of dirty tricks, resorts to rough tactics and turn the tide. She pins her opponent against the ropes while delivering well aimed fists to chest and stomach. When she has her opponent sufficiently softened up,she closes in for the kill with an unusual hold that,s part sleeper, part choke. The victim holds out against this deadly grip for an amazing length of time before succumbing. The cruel ordeal ends with the victim out and down to stay.
Jane Crombie 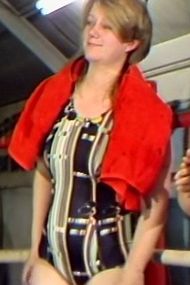 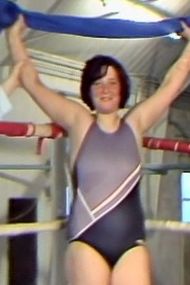