Eve, in a print mini - dress that leaves little to the imagination,coming upon another Latin lovely, Santana, in a barren garage where Eve accuses Santana of stealing some mysterious disk. Santana,stunning in red bikini top, skirt,heels and gloves, denies any knowledge of any tape, which infuriates Eve, who begins a furious choking assault on the lady on red. Tides turn rapidly and often as each girl manages to choke the other unconscious only to have her opponent recover and retaliate with choking and smothering action of her own.As the beautiful combatants are stripped down to thongs, hosiery and high heels the action grows ever more intense. The sheer variety of ways they find to squeeze the air out of each other's lungs, from straight gloved hand to throat,to leg scissors to breast smothers, finally takes it toll as one battling babe lies at the feet of her victorious foe, delicious prey for her tormentor's pleasure.Whether a victim or a victor, Eve is a queen of destruction in this tape that will leave you, too, breathless.
Santana 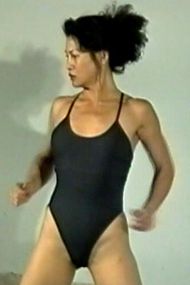 OUR POPULAR and delectable redhead Eve (formerly Tara) is featured in two violentencounters. The first match starts with a nude, unconscious Eve hanging on the ring ropes as Francesca comes in to revive her. The lusty Latin is turned on by the sight of the helpless Eve and starts kissing her back consciousness. Eve doesn't appreciate this one bit and she begins insulting Francesca. Big mistake. Francesca challenges Eve to a no - holds - barred fight where the mocha - skinned voluptuary vows to totally annihilate the titian - haired babe with gut - punches, sleepers and suffocating chokes. And every time Eve goes out, Fran promises to wake her up as erotically as possible, only to knock her out yet again. At one point the crazed Francesca even uses a lit cigarette to jolt the senseless Eve back to harsh reality. And then, when Eve is beyond recovering - well, that's when Francesca really gets to have fun!
Eve (DT)
Francesca (DT)